In an effort to minimize the risk of spreading the Coronavirus (COVID-19), City Hall will be operating via appointment from 9 a.m. to 3 p.m. For COVID-19 information in the City of Pawtucket, please visit http://www.pawtucketri.com/COVID19.

National Grid and the Old Slater Mill Association (OSMA) have embarked on a critical project to help preserve the 1792 Slater Dam.  A major component to the history of the Slater Mill grounds and the American Industrial Revolution story, the dam was constructed by the same men who launched the textile industry in Pawtucket.  It’s also a symbol of landmark water rights legislation from 1824 that continues to influence decision-makers today. 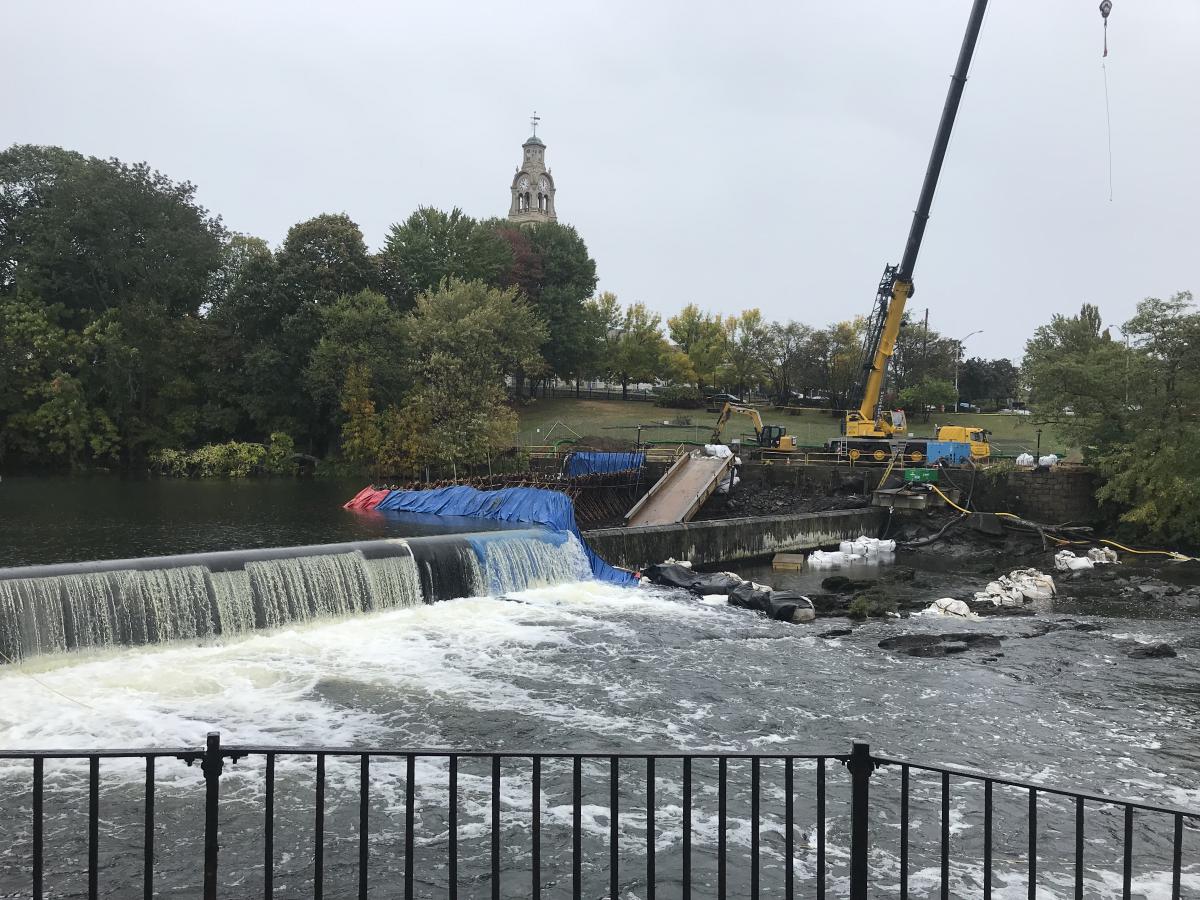 The dam is being repaired by National Grid after a hole developed at the base of the structure, forcing water to flow underneath it and threatening the dam’s foundational integrity.  In 1944, the original wooden cribbing that had been put in place in 1792 was reinforced with concrete. For decades, the six-foot high dam funneled the water down to the neighboring Main Street Dam.  However, after many years of wear and tear the existing gap was created in recent years.

The damage to Slater Dam was classified as “low-hazard” – meaning it presents minimal risk to human safety – and it is no longer relied upon for commercial hydropower generation.  Therefore, neither National Grid nor the OSMA faced a mandate to prevent its failure. However, both OSMA and National Grid saw the importance in maintaining its viability and pursued a resolution.

“National Grid felt that the investment in the dam repair and the preservation of this iconic waterfall was the right thing to do for Pawtucket and our customers,” said Terry Sobolewski, President, National Grid Rhode Island.  “Not only will this effort help ensure the authenticity and future longevity of an important historical site, but it will also transfer full ownership of the dam and water rights to OSMA – an organization fully committed to the historical preservation of the Slater Mill campus.”

“Since its founding in 1921, the Old Slater Mill Association has remained dedicated to the preservation of the Old Slater Mill National Historic Landmark District, not only for its cultural significance but also for its graceful presence on the landscape of historic downtown Pawtucket, Rhode Island and the lower Blackstone River Valley,” said Lori Urso, Executive Director of Old Slater Mill Association. “We are proud to have partnered with National Grid on this effort and thank them and the City for their hard work to make the repairs happen.”

In the early twentieth century, the Blackstone Valley Electric Company (BVEC) purchased portions of the dam and water rights from several manufacturing firms. BVEC later merged with Narragansett Electric Company, which in turn was acquired by National Grid. National Grid currently owns roughly three quarters of the Slater Mill Dam while the Old Slater Mill Association owns the remaining quarter.  As both entities considered how to resolve the challenges of the dam, an agreement was reached where

National Grid would undertake the repairs to the dam, after which they would transfer their ownership and water rights to the OSMA.

The agreement will enable the OSMA to further its mission to preserve all the resources that contribute to the Old Slater Mill National Historic Landmark District, and the Blackstone River Valley National Historical Park.

“The Slater Dam is the dam that powered the American Industrial Revolution, and our nation's transformation into an industrial powerhouse,” said Pawtucket Mayor Donald R. Grebien. “Our city is proud to be home to this incredible turning point in American history, and to partner with the Old Slater Mill Association in the preservation of not only the mill, but the significant resources that contribute to this important story,” he said.  “I would like to thank the Old Slater Mill Association and National Grid on their collaboration and efforts to repair Slater Dam.”

National Grid contracted with GZA GeoEnvironmental, Inc. of Providence to prepare plans and obtain the necessary permits for the repair. After a competitive bidding process, J.H. Lynch & Sons, Inc., another Rhode Island company, was awarded the construction contract. Repair work is underway, and is expected to be completed by early November 2019.

Upon completion, all water rights will revert to the OSMA, which is currently in negotiations to transfer all its property holdings to the National Park Service to ensure the preservation of Old Slater Mill in perpetuity, for the enjoyment of residents and visitors for generations to come.