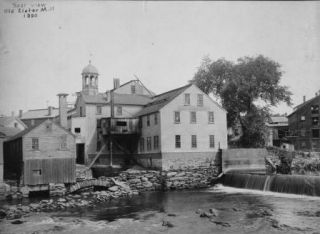 Pawtucket is a city of 71,148, persons founded in 1671, at the strategic falls of the Blackstone River and the upper tidewaters of Narragansett Bay. It is a city with a special place in the industrial history of the United States. For it was here at the Slater Mill Historic Site that Samuel Slater successfully constructed and operated machines for spinning cotton yarn in 1793. Besides textiles, a variety of machines and iron working shops grew up alongside the textile industry.

The industrial development of Pawtucket continued to expand for the next century making it a highly developed and important manufacturing center. Although the textile industry is no longer dominant, a number of specialty textile operations still remain in Pawtucket, making products such as lace, non-woven, and elastic woven materials.. Pawtucket now has 300 diversified industries with the three largest being jewelry and silverware, metals and textiles.

The past decades have seen concerted efforts to diversify the economy of the State, and Pawtucket has participated in that undertaking. In the case of Pawtucket, major political reforms preceded extensive physical changes to the city. A home rule charter went into effect in 1954 providing a strong mayoral and unicameral City Council form of government, a clear organizational format, with professional officials and staff. Since 1956 the city has been a leader in community development programs, modernized and upgraded facilities and services. It has maintained consistent budgeting and fiscal methods, and instituted modern planning, programming, and management techniques.

The City of Pawtucket today includes: major residential areas with 30,000 housing units, an employment center with 300 industries and 1,000 commercial and service establishments, and convenient links to the other major metropolitan areas by Interstate 95. City development policies over the last twenty years have been targeted to 1) improve the quality of residential neighborhoods and the housing stock, through rehabilitation programs, 2) expand the employment opportunities through stabilizing manufacturing centers and the creation of new industrial opportunities, and 3) assistance to the commercial sector with rehabilitation loans and location incentive loans.

Rank: In 2010 Pawtucket ranks 4th in population among Rhode Island's 39 cities and towns.